Does It Make Sense For India To Ban Driverless Cars?

Does It Make Sense For India To Ban Driverless Cars?

On 24 July 2017, the Government of India announced that it will not allow automated (driverless) vehicles in India, well in advance of a time when such vehicles might be introduced. The basis of this stand: India is wary of technology aimed to eliminate a large job-providing sector. Though there are no official statistics, India has millions working as passenger-vehicle drivers (including commercial vehicles and household chauffeurs). This number is only expected to rise in the future.

"Automated cars" are a new-age prototype, running driverless on GPS, laser, infra-red and computer-vision technologies. Today, the technology is being touted as the future of automobiles by experts the world over and expected to increase traffic efficiency and reduce road crashes.

While automation could improve traffic management, it would be counter-productive if it draws people away from transit systems and shared mobility options, and toward single occupant travel.

However, the Indian government's apprehensions come as a stark contrast to the world community at large. In the United States, for example, while there are also millions of paid driving jobs, the House Energy & Commerce Committee just unanimously moved forward a Driverless Vehicle Bill, streamlining testing and deployment of light duty driverless vehicles. While this early-stage bill is nowhere near law, its passage out of committee sends a signal of bi-partisan support for moving US driverless technology rapidly forward despite possible labour market impacts.

For India, job loss is an understandable concern, but does it really make sense to ban automated vehicles outright? Automated vehicles could cut down on roadway fatalities and injuries, of which India has some of the highest rates in the world today. On the other hand, some may wager that safety benefits might not be so easily realised given the chaotic nature of India's roadways. Even in the US, the benefits of automated vehicles may take decades to realise, given the long transition of removing driven vehicles from roads, as a recent UC Davis report showed.

There is also a need to consider whether automated vehicles will provide an important sustainability benefit. In the US—a country where currently over 90% of trips are done by car, the vast majority being single-occupant—automated vehicles could help reduce this traffic. From a traffic point of view, the goal in the US is to encourage people to consider almost any alternative—including ride sharing, mass transit use, bicycle trips and so on. There is a sense that if automated taxi-like services become cheap enough, ride-sharing will increase, car ownership may drop and a greater range of modes of transport may be used.

[C]urrently a key question for India is how to preserve efficient transit and shared mobility systems. The government's role in establishing policies (such as pricing incentives) to promote shared mobility may be critical...

However, India already has a very high rate of "shared mobility", including public transit, private buses, micro-buses, and shared auto-rickshaw trips. Lowering the cost per trip of single-occupant travel options by removing the driver could draw people away from shared mobility, and result in increases in traffic and emissions. While automation could improve traffic management, it would be counter-productive if it draws people away from transit systems and shared mobility options, and toward single occupant travel. Millions of individuals travelling alone would likely be a traffic nightmare on Indian roads, automated vehicles notwithstanding.

Also, driver costs in India currently are not as big a share of the "cost per trip" for taxi-like services as they are in the US (see figure). In the US, drivers account for half or more of the total cost of operation (or to put it another way, drivers take home about half of the revenues they earn from riders). In India, they are estimated to account for only about 20% of the total costs. However, this low driver cost share of ride-hailing services could change over time, as India witnesses rapid economic growth with increases in driver pay. As that happens, the cost reduction effects of automation will increase. 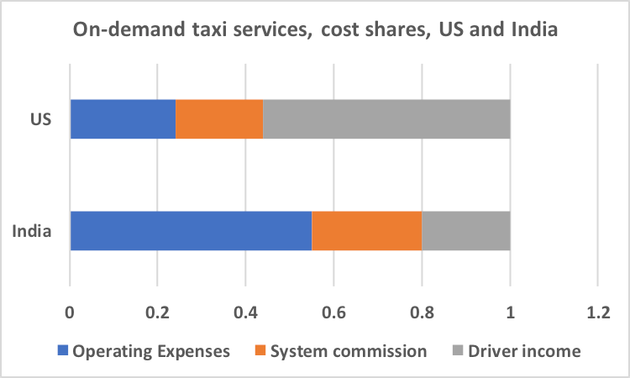 Notes: US from Hall and Krueger, 2016; India data from WRI-India, survey of on-demand taxi drivers, 2017, not yet published. The US numbers do not include driver bonuses and tips. On the other hand, more recent data suggests their share of base revenues has fallen in the past 2 years.

More research is clearly needed into these dynamics, but currently a key question for India is how to preserve efficient transit and shared mobility systems. The government's role in establishing policies (such as pricing incentives) to promote shared mobility may be critical—public transit must remain competitive and true multi-passenger ride sharing must be attractive in terms of the time, convenience and general quality of the travel experience.

Overall, it may be smart for India to take a "wait-and-see" approach to automation and focus instead on actions it knows can help with traffic and mobility over the coming decade. Because once the automation genie is out of the bottle, it may be difficult to put it back.

How has the pandemic has increased the use of cars? Dr. Giovanni Circella with Cap Radio